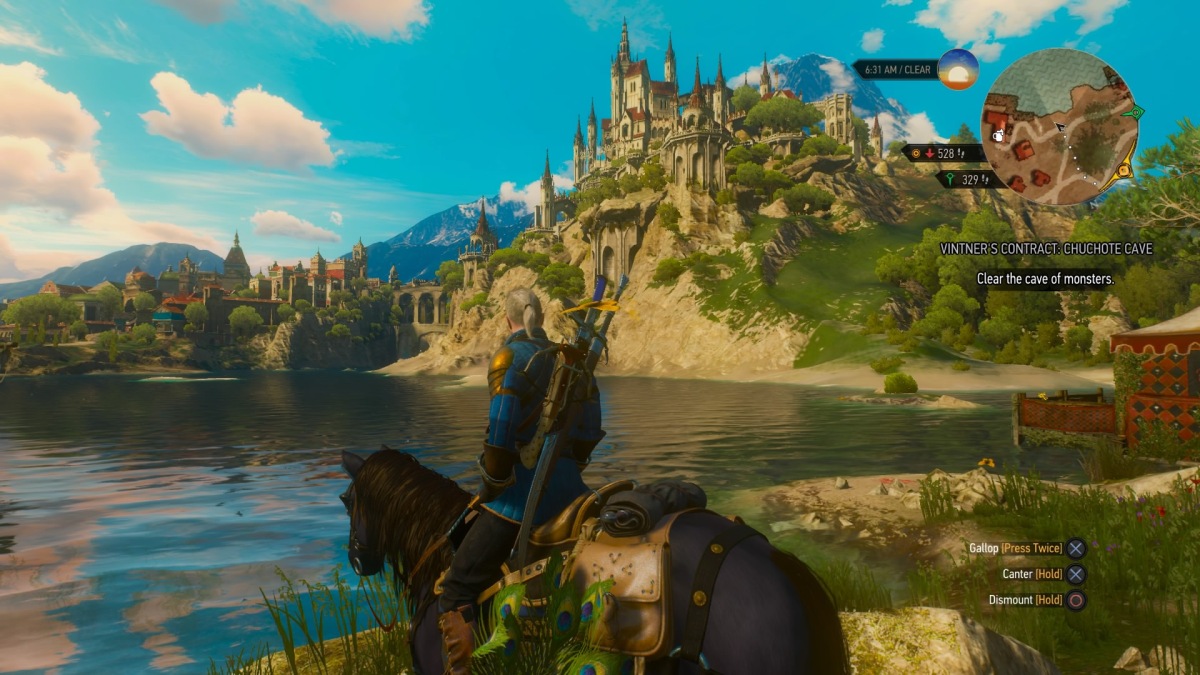 Previously, I wrote an article listing multiple reasons why Horizon Zero Dawn is one of the best RPGs to release recently. Only one game tops that fantastic title, and it’s called the Witcher 3: Wild Hunt. CD Projekt RED, somewhat unknown in the United States until the release of The Witcher 2: Assassin of Kings (that game is also phenomenal and I highly recommend going back to it if you want to see how much the series evolved between iterations), their name was rightly sung in the highest of the gaming heavens for this masterfully crafted game. In fact, calling it a game doesn’t do this interactive experience justice, because it is so much more than a game. It’s a living, breathing world that is shaped by your actions and interactions with the hundreds of NPC’s across literally hundreds of hours of gameplay. Here are just some of the reasons this game will always have my RPG-loving heart forever.

In order to keep my interest, an open world game needs to have something that sets it apart from other games. The world in the Witcher 3 is not just gorgeous to behold (see screenshot above for proof), exploring it is just as captivating. Every question mark on the map holds something interesting, whether it’s an important landmark, an area infested with monsters that you can claim for the townsfolk to restore, hidden treasure, or a brand new quest. When the Hearts of Stone expansion released, I found myself traveling into areas I wasn’t nearly ready to conquer, just to see what new places and loot I could find on my travels. The second and final expansion, Blood and Wine, adds over 30 more hours of content to uncover, along with a vast land inspired by French architecture. A realistic day/night cycle and dynamic weather also adding to the impressiveness of this gorgeous game. The realistic facial expressions and animations also bring out the believable nature of the game, too.

While I personally enjoyed the combat in the Witcher 2, I understand why a lot of people I spoke with about the title described it as “clunky.” It sort of was. There wasn’t a nice flow to it like the Batman Arkham Asylum game that released two years prior and really set the standard for how fluid combat in RPG’s could feel. Witcher 3 definitely improved upon its predecessor, adding a new rune crafting system, better inventory management (thank goodness for chests), more upgrade options for signs (magic) to use in combat, and a satisfying counter system. Instead of having a light, medium, and heavy attack for combat like the original, the later two ditched that for just a heavy and medium attack, which absolutely streamlined it with what also worked in somewhat similar titles.

Speaking of combat, how does it sound to take on a dragon. Everyone likes that in games right? What about a GIANT dragon that is as intimidating to look at as it is to slay? Or how about a griffon terrorizing the local folk by eating their livestock? Or maybe you prefer traditional golems and liches that so many fantasy games feature? In this game, you get all of that and so many other varieties its almost overwhelming to list them all. Thankfully, the game keeps a bestiary of each one you encounter so you also know what potions, oils, and signs are effective against them.

Which brings me to the last improvement on combat: preparation. Playing the Witcher on anything but easy can be a real test of your mettle. You are able to drink potions that vastly increase certain attributes like vitality or strength, apply different oils to your weapons before entering combat with a foe, lay down traps, or cast signs on the ground and yourself to snare your enemy or even reflect damage back at them. All of this helps you take down the biggest of baddies, and for them you will definitely need all of these on your journey to save Ciri.

Speaking of Ciri, the whole story of the Witcher 3 revolves around Geralt finding his long lost acquaintance, Ciri, and saving her from a quickly approaching catastrophic event stemming from her being the last in a line of humanoids who can control space and time. Without spoiling anything specific, let’s just say I was left breathless after I finished the main quest. The expansions also have memorable stories to behold, including a massive toad that speaks (sure why not). The fantastical elements never feel out of place in the world, it’s weird and wonderful in its own quirky way. Geralt knows a lot about killing monsters, but even he doesn’t understand everything that happens in the world around him. The game earns a tip of the cap and two thumbs up for not over-explaining every little thing through spoken exposition, and instead lets you purchase books and read the lore in a separate menu if you want to dive even deeper, and I wholeheartedly recommend that you do.

Geralt of Rivia (voiced by Doug Cockle) steals the show as the lead character, but other characters round out a very enjoyable cast that returns from Witcher 2. Also featured in the game is Dandelion, possible my least favorite character in the game, Yennefer of Vengerberg (Geralt’s previous love interest), Triss Merigold (a sorceress and possible love interest), Zoltan Chivay (one of Geralt’s closest allies) and of course Ciri. All actors and actresses did a fantastic job bringing these characters to life, and even though I didn’t care for the character of Dandelion in any of the titles, I respect the great job he did in reprising his role. They all have a unique way of interacting with Geralt depending on how you choose to treat others in the world, something may other games fail to accomplish. If you are a total jerk to other people, not only will you most likely have everyone despise you throughout the game, but you will get one of the most unsatisfying endings you can imagine. Just keep that in mind when you want to continually bribe the poor townsfolk for monetary paying in exchange for investigating their requests.

Witcher 3: Wild Hunt is a masterpiece of a video game, something I don’t think can be easily replicated  anytime soon. It had the perfect mixture of solid combat, enjoyable exploration, interesting characters, and so many other great touches like the addition of Gwent (the mini-game in a video game, period). This immersive experience is something I’ll never forget, and after over 100 hours of playing, still go back to it on a very regular basis. I can’t wait to see what great things CD Projekt RED has in store for us with their newest title, Cyberpunk 2077. Did you play the Witcher 3? Did you like it as much as I did? Let me know in the comments!

I am the owner of Creative Mind Games, and author of the soon-to-release Aetherial War saga of novels. I am an avid reader of science fiction and fantasy works, and love to sit down with friends for card game nights! View all posts by Nathan Doverspike

2 thoughts on “The Witcher 3: Wild Hunt is the Best RPG Released in the Last Decade”