For nearly 18 years, I’ve been playing video games, from Tomb Raider 2 to Horizon Zero Dawn (go play it if you haven’t, it’s amazing) and loving my time with most of them.  Every once in awhile you come across a game that just doesn’t click for you, whether its the story, theme, gameplay, art style, or maybe something as simple as the music.  I used to do everything I could to push passed these obstacles, in the hopes that there would be some sort of payoff in the end; some feeling of satisfaction for continuing with a game that I didn’t necessarily enjoy.  One title, named Mass Effect Andromeda did just that; it broke me of this habit.  As the title of this article states, after playing Mass Effect Andromeda, I realized that I can no longer beat games that I get no enjoyment from playing.

Before I get into all the reason I refuse to beat games I don’t enjoy and the game that ultimately crushed my soul, I need to say this first.  I LOVE Mass Effect 1 through 3.  I was even alright with the original ending of Mass Effect 3 before they extended it with free DLC.  It had a conclusion, even if it felt like there wasn’t as many choices as there could have been.  It made sense, and that’s what I wanted.  I also adored the characters.  There’s a reason there is a giant piece of artwork featuring characters from Mass Effect in my living room.  The characters and their stories were the best part of the original trilogy, in my opinion.  That said, on to this albatross of a game.

There’s not enough space on this page to describe how frustrating that game was.  To start, the facial animations at launch (they released a patch  that fixed some of the issues) were not only atrocious, they were appalling to behold.  They were so gross, that I thought I was playing some terrible $1 Steam Greenlight game (RIP Steam Greenlight) that used Unity stock assests to make a quick buck or two.  Want to see how ugly they can be? You’ve been warned. 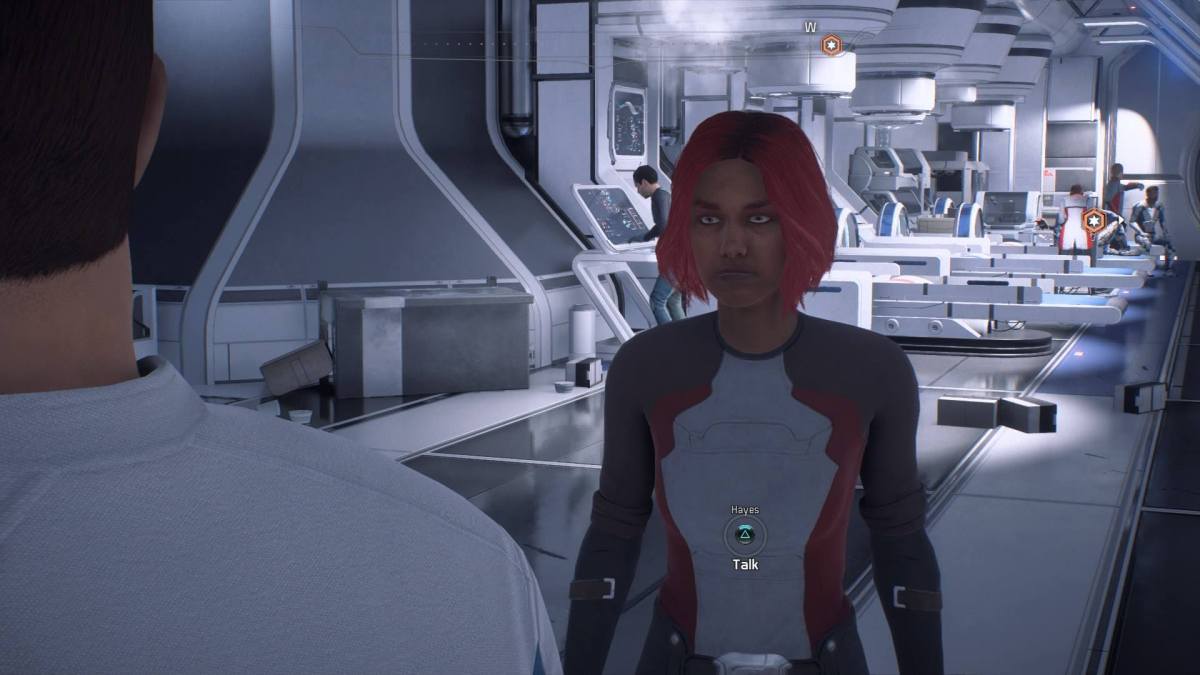 This is the first person I interacted with in the game. Little did I know, it didn’t get much prettier than that…face.  I think that’s a face?

Yup, that’s how my failed journey through the boring and uneventful game called Mass Effect Andromeda began. With that face staring at me.  Ok, so the combat was satisfying and the skill tree allowed for a bevy of customization.  But in a game that resembled Dragon Age Inquisition more than the original Mass Effect trilogy, I didn’t enjoy the exploration, party members (there were only six, SIX), or the bland/terrible story they tried to tell.  I loved the premise: you are sent on a 600 year journey to find another galaxy to colonize in case the Milky Way is destroyed by the Reapers.  Cool right?  It is, until some of the worst writing in video games is on full blast right from the start and all the characters look like they are from some alpha version of the game.  It felt unfinished.  By all means, it was.

I spent over THIRTY FIVE hours on this turd.  I did everything I could to enjoy it.  I would play podcasts while playing so I had something interesting to listen to (the dialogue is embarrassing except for maybe Drack and Jaal).  That only helped so much, until I realized I wasn’t even having fun exploring the FIVE planets. Yeah, you have the pleasure of exploring FIVE planets the WHOLE GAME.  Even Dragon Age 2 had more locations to explore, and they even recycled a lot of them to pad the time it takes to beat the game.

I ended my playthrough after reaching the third planet.  It was a giant ice location full of sadness and emptiness. Wait, that’s what I was feeling while I was playing this.  Sorry about that. I meant to say it was full of empty space and sparse enemy encounters, sprinkled in a few giant towers that you need to scan (that part sucked too) and a ton of fetch quests that amounted to getting some experience and nothing satisfying.  I couldn’t take the punishment anymore, so I traded in Mass Effect Andromeda and used the money to wipe my tears away.

As we come to the end of my sad tale, I want to make it clear that I am totally cool with anyone liking this game.  I just found it unbearable for the reasons listed above, but everyone is more than welcome to have their own opinions and likes/dislikes.  I want to hear from YOU!  Are there any games that you just couldn’t finish?  Why? Was it because of the gameplay, story, or something else entirely?